Dr Phil Gan, a general surgeon, has invented a surgical device called the LiVac™ Retractor, that has significant advantages over traditional methods during laparoscopic surgery which require the liver to be retracted. 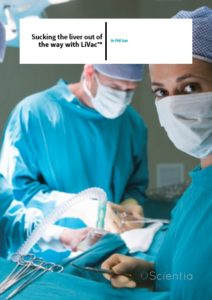 Any technological advances which reduce the amount of trauma caused by surgical procedures can enhance patient recovery and help to minimise complications. Laparoscopic, or ‘keyhole’ surgery, has allowed many procedures to be performed without the need for major incisions (laparotomy). Although this has proved a major advancement, surgeons are constantly trying to improve their techniques, such as by reducing the number and size of incisions required for a particular operation. Dr Philip Gan is a general surgeon based in Australia, who has made such an advancement through the invention of an innovative piece of technology called the LiVac™ Retractor.

Issues with retracting the liver

The liver, our largest internal organ, must often be retracted, or moved out of the way during laparoscopic operations to allow the surgeon access to particular parts of the body. The left lobe of the liver is retracted for surgery performed on the stomach, while the right lobe is retracted to allow access to the gallbladder and right kidney. A device called a Nathanson retractor, which has been in use for decades, consists of a curved and bended steel rod, is traditionally used for retracting the left lobe of the liver. The retractor is inserted through an incision in the epigastrium (the central region of the abdomen just below the rib cage) and placed under the liver before being fixed to a frame bolted to the operating table. Retractors may be held in place during the operation by a surgical assistant, who may also be operating the laparoscope. These methods require an incision and/or port specifically to insert the retractor.

The pressure exerted by the retractor can congest the internal vasculature of the liver, leading to tissue trauma from disturbance of the blood supply and subsequent reperfusion injury. This damage can occur in varying degrees of severity, ranging from mild tissue congestion all the way up to rare reports of liver necrosis and death. Increased time periods for which the tissue is compressed results in higher risk of liver injury, as well as a subsequent inflammatory response which makes the patient feel unwell.

Retraction techniques can also include suturing (stitching) of the liver or gall bladder to the abdominal wall, which may cause undesirable tissue trauma.

From ideas to prototypes 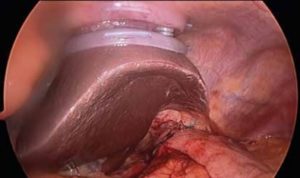 ‘In any field, if you are not moving forward, then you are going backwards. Innovation is the catchword of the moment, and not without good reason’, says Dr Philip Gan. During surgery, Dr Gan observed the left lobe of a liver which had adhered to the diaphragm from surface tension alone, and saw an ingenious way to move the field of surgery forward. ‘It occurred to me that if surface tension alone could hold up the left lobe of the liver, then so too could suction.’ Over the next few years, his idea developed into the LiVac™ Retractor (Liver Vacuum), which after lodging a provisional patent in 2010, he produced with the help of an Australian medical device manufacturer and engineering company, Ingeneus Pty Ltd. Dr Anabela Correia, a specialist in the commercialisation of medical technology, and a number of consultants in the industry also assisted over the subsequent years.

The device is a collapsible, soft, ring-shaped object made of silicone, attached to suction tubing. When attached to a regulated source of suction, a vacuum is created in the space inside the ring. The retractor is placed in apposition between the liver and the diaphragm, and suction is then applied to the LiVac™ Retractor. This then mimics the effect which Dr Gan had originally observed, in adhering the liver to the diaphragm. Compared with hand held retractors, the surgical assistant would instead be able to give their full attention to optimising the view through use of the laparoscope. No attachment to a fixed frame is required when using the LiVac™, since once the suction is applied, the diaphragm takes the weight of the liver, rather than its weight being taken by an attachment to external apparatus. The LiVac™ suction tubing can exit alongside existing ports and therefore a dedicated incision is also not required, as it would be when using the Nathanson retractor.

The LiVac™ Retractor is produced in two sizes, large (78mm diameter) and small (56mm), with the smaller version being suitable for retraction of the left lobe and the larger size being more suited to retraction of the right lobe. The collapsible nature of the LiVac™ Retractor means that incisions through which the retractor is inserted do not need to measure the entire width of the ring. In fact, retractors of either size can be inserted through the lumen of a 15mm port or the tract created by a 12mm port. The LiVac™ Retractor is also disposable, which is a desirable specification for most pieces of surgical equipment, as it guarantees sterility.