First published in The Standard, 19 August 2016

Surgeon Philip Gan is using a new model of mini-laparoscopic instruments. He’s holding one of the new instruments in his right hand, compared to the larger, older equipment in his left.

A Warrnambool surgeon is combining his world-first invention with state-of-the-art equipment to get better outcomes for south-west patients.

Working at St John of God, surgeon Philip Gan has performed the nation’s first laparoscopic, or keyhole surgery, with a new model of instruments that have not been used in Australia before.

Mr Gan uses the mini equipment in some operations alongside his LiVac Retractor. He said the min-laparoscopy technique minimised trauma for the patient and lessened recovery time. 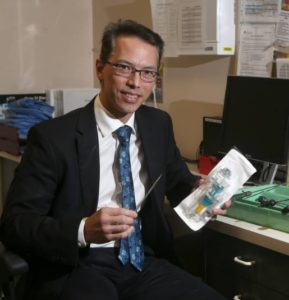 Keyhole surgery involves performing abdominal operations with multiple small incisions through which ports are placed. Instruments used for the operation are then passed through the ports.

St John of God’s new mini instruments are the newest available and ports measure just 3.5mm in outer diameter, while the instruments themselves are about 3mm. The smaller the ports, the less impact on patients. Mr Gan said one woman coming out of surgery described the incision marks as “mosquito bites”. The cuts are so small that they don’t need stitches.

“Although my first mini-laparoscopic operations were done two years ago, I have had to use instruments loaned from companies on a trial basis for short periods of time. Now that St John of God Warrnambool has purchased two sets, doctors will be able to use these wonderful instruments much more regularly,” Mr Gan said.

Combined with the LiVac Retractor, it means fewer incisions for patients. It can be squeezed into the body through a keyhole incision and positioned using a micro camera. When activated it then gently sucks the liver away from either the stomach or gallbladder, depending on surgery requirements.

Patient Veronica MacLean, who had her gallbladder removed with the new instruments last week, said it felt pretty special to be the first patient in Australia to be operated on with the new equipment, but even better that the operation was trauma-free. “I feel great,” she said.

The LiVac Retractor is beginning to be used in operating theatres across the globe, while Mr Gan said there was also growing interest in mini-laparoscopic surgery.

“The ultimate goal is to perform the internal surgery with as minimal trauma, pain and scarring as possible,” he said.

“If surgery is done the same way now as it was 10 years ago, can you call that progress? We need to embrace new technologies. This benefits patients and the community.”