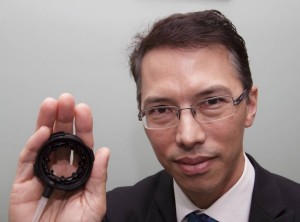 A Warrnambool surgeon has gained a $250,000 federal government grant to help develop a medical invention which could be a top-seller around the world.

Philip Gan will soon start testing his laparoscopic liver retractor on humans after it was successfully used in animal surgery.

If approved by the federal Therapeutic Goods Administration the device can be marketed across Australia and in Europe. Interest has also been expressed by potential buyers in the US and India.

The Standard understands it is the first time a local medical invention has ever undergone proof-of-concept human trials in Warrnambool.

His unique invention has been in various stages of refinement for the past three years and was triggered by what he saw as a crucial need in stomach and gall bladder surgery to lift the liver easily without damage.

“It’s been an incredibly expensive project to get it this far,” Mr Gan told The Standard.

“The government grant must be matched dollar for dollar and I’ve spent a similar amount of my own money in the past three years.

“I’d work on it two or more hours every evening. But it has worldwide market potential and there has been strong interest from Europe and India and we are in discussions with US links.”

The grant through Commercialisation Australia will allow proof-of-concept trials on humans in Warrnambool Base Hospital and St John of God Hospital.

Recruitment will start soon for 10 operations in September-October 2013, which will be closely monitored for the approval process.

Mr Gan, a surgeon for 12 years, first devised the concept while reviewing a lapband operation. The first prototype was made from a silicon kit ordered over the internet which he fashioned into a circular suction pad and tested using two fitness balls.

He later engaged engineers in Melbourne to refine the design into what is now a two-sided suction ring about five centimetres in diameter with a hose attached. It is called a Livac.

It can be squeezed into the body through a keyhole incision and positioned using a micro camera. When activated the Livac gently sucks the liver away from either the stomach or gall bladder, depending on surgery requirements.

Mr Gan said there was also potential for use in operations requiring the uterus to be pulled aside.

It’s not the first time he has thought of inventions to improve surgical procedures and does not rule out pursuing some of his other ideas in future. In 1985, while still a medical student, he hit on the idea of a now-common intra-gastric balloon to combat obesity.

“Unfortunately I didn’t have the money to take it to the market,” he said.